Computers predate silicon microchips and CPUs by many years. The cutting edge PCs we are familiar with today can follow their underlying foundations back to basic computational machines that were significantly different from what they are today. By definition, a computer is quite simply a device that can perform mathematical calculations or equations. In this way, numerous simple inventions, for example, an abacus, (which goes back thousands of years) or a slide rule (which goes back hundreds of years) are the heralds of the present computer.

A gear powered device built by Wilhelm Schickard in Germany back in 1623 was actually the first machine to work like a computer but was operated by pushing or pulling rods that were situated inside a glass case. Then something similar known as a Pascaline, wound up prominent during the 1640s. These two gadgets were the heralds of a steam-powered “difference-engine” brought to light in the 1820’s by Charles Babbage.

The “difference-engine” by Charles Babbage then led on to the design of the first programmable general purpose computer in 1837, it was called the Analytical Engine, and the design was a collaboration between Charles Babbage and Ada Lovelace.

Then in 1935, Alan Turing created a design for the workings of a modern computer. The British scientist also designed programs that could be used by a computer built from his design to perform various functions.

The first individual to actually assemble a working, programmable computer, and not just design one, was a German inventor, Konrad Zuse. He assembled the Z3 in 1941. It used punched film as storage for its program code and data. Another early computer was likewise developed at this time. The machine was called the Colossus and it was invented by Tommy Flowers at Bletchley Park. Its purpose was to process a lot of information, and it empowered British cryptographers to break coded German correspondence messages.

Check out this brilliant timeline from BBC Bitesize showing the history of computers: 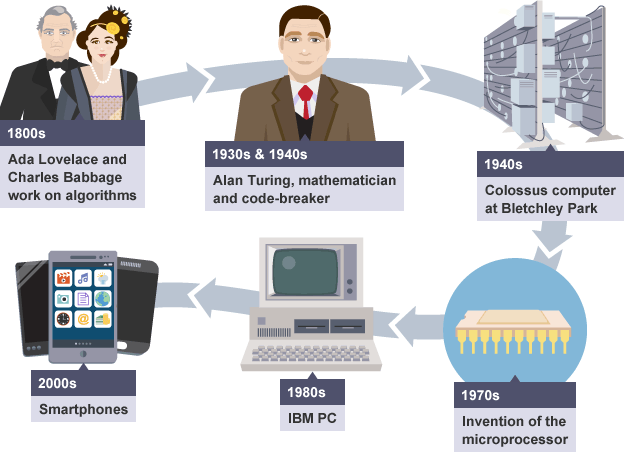 The transistor being invented by William Shockley in 1947 was a huge turning point for computers as it evolved the CPU and has undoubtedly allowed computers to become what they are today. CPU’s double in speed every two years or so and have for roughly the last 50 years as described in Moore’s Law which was a theory developed by Gorden Moore.

Any device that can be programmed with a set of instructions is a computer regardless of whether it can do many complex functions or is built to do one main thing. Most machines containing a CPU, such as modern PC’s and smartphones, can be described as general purpose machines because they can be used for a wide variety of things. Software can be added to them to enable them to be utilized for a wide variety of purposes such as browsing the internet, playing games, developing websites or performing an accounting role.

Some machines, such as the older games consoles that could not be reprogrammed, are instead described as special purpose machines because they were built to serve a single purpose.